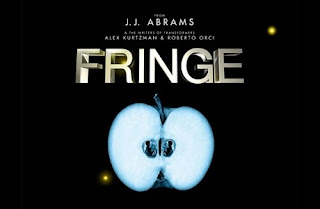 Fringe is one of the only new shows that I have any interest in this season. I was really excited about it since it was created by J.J. Abrams who also created Lost and Cloverfield. If you have not checked it out or need to get caught up, the first four episodes are still available to watch at the Fringe site.

Don't rush to judgement on Fringe. The pilot is good but it isn't great. That tends to happen with this kind of show due to all the set-up and character development that is crammed down your throat in the first hour or so. The series, so far, revolves around the experiments of a mad scientist named Walter Bishop who has been locked in a mental institution for years. Someone is using the experiments on people in society, this phenomenon has become known as "The Pattern". FBI agent Olivia Dunham releases Walter with the help of his son Peter and they work together to figure out what is going on. Joshua Jackson is an annoying douche in the pilot but he starts to settle into the character and becomes much more likeable as Peter Bishop. "Fringe" refers to fringe science or theoretical science. The gimmick of the show is that all of the events have a valid scientific theory behind them which does serve to give it a creepy feel.

The show overall has an X-files kind of vibe to it. It is also set up similar to the X-files in that the episodes are self contained stories that complement the bigger story of "The Pattern". While Fringe doesn't resemble Lost (even though they do both start with a plane crash....hmmm) it is beginning to reveal Easter eggs, codes, and patterns in the episodes and the advertising images. Fans of Lost will be happy to know that they can now spend hours trying to figure out the secrets of Fringe on the internet. I really like this show but I'm not going to drive myself crazy over it.....yet. Check it out, get caught up, and we can discuss the weird stuff that is starting to go down.