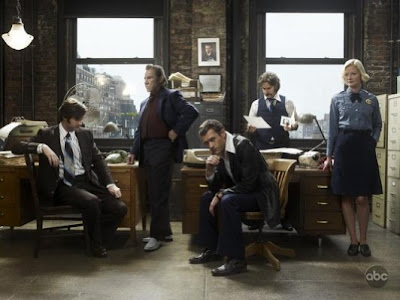 Only one network show has really caught my eye in this new Fall season. It started with a unique ABC ad campaign that used their 1970's logos and sweepers. This was before my time but it did grab my attention immediately. At first I thought that it was just a cop show set in the 70's but when I saw that it was actually about a cop who becomes displaced in time from 2008 to 1973, I became very interested. I have seen the first three episodes and I am pleasantly surprised. Life on Mars has quickly become one of my favorite new shows.

Life on Mars is another in a long line of British remakes(They really are TV geniuses). This one centers on the strange time displacement of detective Sam Tyler. During an investigation, Sam is struck by a car and instantly finds himself transported from 2008 to 1973. Let me take a moment to say that you will have to take a leap of faith as you watch the pilot. Not because you will have to accept that Sam is a time travelling detective, rather because he is not thrown into the insane asylum within his first hour in 1973 New York. He is not very discreet about the fact that he thinks that he is from the future but his new police co-workers aren't too alarmed and just go on with business as usual. His new boss, played by Harvey Keitel, does hand him a few beatings but nothing that stops them from working together. I'll stop nit-picking now.

This show really is very enjoyable. The sets and costumes are amazing. The show was cast very well. I am not a huge Harvey Keitel fan but the character of Lieutenant Gene Hunt suits him quite well. Sam's closest confidants in his new situation are Officer Annie "No Nuts" Norris (you will learn very quickly in the pilot that they want you to understand that women were not equal back then.......we get it) and his new neighbor Windy. Annie is the force that is trying to keep Sam grounded and convince him that his thoughts of 2008 are delusions and he belongs in 1973. Windy, on the other hand, has a more open mind to his situation and in some ways has become his spiritual guide. It is still early in the show to draw too many conclusions but we are always reminded that Sam is being pulled between both times through visions and mysterious communications that seem to manifest from electrical devices.

The show has me hooked and I highly recommend that you check it out too. If nothing else, watch it just to see Michael Imperioli as the stereotypical 70's detective Ray Carling. He's pretty hilarious. Life on Mars is on Thursday Nights at 10:00 on ABC. You can still get caught up on the first few episodes at abc.com.
Posted by Chuck Power at 1:59 PM

I have yet to watch the ABC version of the show and have little faith in American remakes but will give it a chance. I suggest you try and see the original BBC version its great and worth it for the accents alone. Everything is better with English slang.

I definitely do want to check out the original BBC version. I was not aware of it until the American version started. I agree that the remakes do tend to come up short when compared to the original. The good thing is that I can remain blissfully unaware for the moment if this version is not doing justice to the original.

Ignorance can indeed be bliss. I was very burned by the Coupling remake. It makes me skittish. I'll let you know what I think when i catch up on the ABC version. So far I agree with your opinions so I'll take your word for it.