Come With Me Now on a Journey Through Time and Space to the World of..... 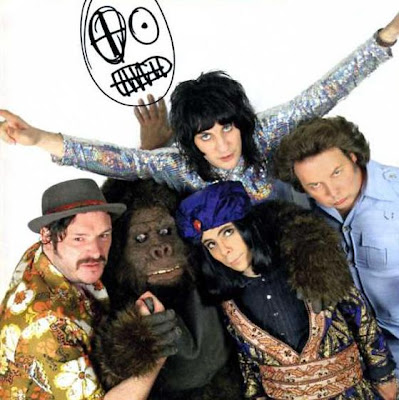 If not for the invention of DVR, I may have never stumbled upon this brilliant mess of a show. My days of being awake at 1:00 AM on Sunday night/Monday morning are long behind me but that just happens to be the time slot for The Mighty Boosh on Adult Swim. This show must be huge with insomniacs and shift workers. It originally aired on the BBC and has completed its third season.
I am really not sure how to describe The Mighty Boosh. Let me try: The show follows the adventures of Howard Moon and Vince Noir. Howard is a jazz loving, fashion victim, loser. Vince is the ultra-mod, hair obsessed, club kid. They live with a Shaman named Naboo the Enigma and a talking gorilla named Bollo. Over the course of three seasons they have been zoo keepers, band members and proprietors of a magic shop. Their adventures have taken them to places such as gorilla hell and the forest of the mod wolves. Along the way they have crossed paths with characters like the Crack Fox, killers grannies, the tentacle headed shaman Tony Harrison, and Old Gregg (a tutu wearing mer-man with a "mangina"). Oh yeah, they also manage to work a song into just about every episode.
It sounds insane right? Well it is, but in a good way. The Boosh is the creation of Noel Fielding and Julian Barrett. They play Howard and Vince plus most of the secondary characters. The other main actors are Noel's brother Michael who plays Naboo and routinely steals the show, and Rich Fulcher. Fulcher is the only American and his main character is Bob Fossil who is loud, obnoxious, fat, and always very funny. The Boosh actually started as a radio show in Britain and eventually found its way to the TV. The show is weird, surreal, and always hilarious.
This show is probably hit or miss with most people but it was a home run with me and I would definitely recommend giving it a shot. Besides, what the hell else are you watching at that time?If you aren't a night owl or don't have a DVR, the DVDs of the first three seasons are now available in the US.
Posted by Chuck Power at 10:08 PM 2 comments: