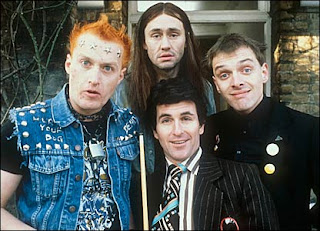 Some things will always be funny. The Young Ones is one of them.

The Young Ones premiered on British television 25 years ago. Like many other British shows, it had a short run; 12 episodes. They understand the concept of not running an idea into the ground. Those 12 episodes contain some of the funniest moments I've ever seen.

The series revolves around 4 college room mates(although they never seem to go to college or study). The Young Ones are Rick (a self-absorbed anarchist poet), Neil (a hippie), Mike (the self proclaimed cool person) and Vyvyan Bastard (the punk rock medical student). They live in a filthy apartment that serves as the main stage for the show, and seems to be a magnet for strange situations. Many of the situations involve the characters fighting in violent and hilarious ways, in part due to their boredom with everyday life.

The Young Ones mixes a sitcom with a variety show. This was actually done so that they could get a larger budget by being classified as a variety show. The result is a surreal comedy that includes stand-up comics, puppets, and musical acts. Motorhead, Dexy's Midnight Runners and Madness all made appearances on the show.

I have seen all the episodes many times but I always go back for more. I highly recommend this if you have never seen it before. If you have seen it, watch it again. You can get the entire series in a DVD collection called The Young Ones: Every Stoopid Episode.

Watch this show! It may seem like it's full of silly humor at first, but it's actually a very smart and well developed show. Nice write up Chuck. UP CHUCK...get it.