Freaks and Geeks got it right. 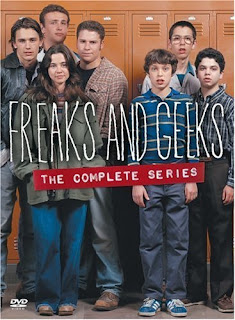 Freaks and Geeks makes me happy and sad all at once. It is one of the best shows that I have ever seen. The unknown young cast of Freaks and Geeks have almost all gone on to huge success(James Franco, Seth Rogen, Linda Cardellini, Jason Segal, etc.). Freaks and Geeks had the perfect balance of comedy and drama without being too corny or overly sappy.

It only makes me sad because it wasn't given the chance that it deserved. This amazing show was under promoted and buried in bad time slots. This resulted in the show being cancelled after only one season. In retrospect, this may not have been a terrible thing for true fans of the show. The creators must have seen the writing on the wall because the series has the feel of a contained story that comes to a satisfying end. You will always want more, but they don't leave you hanging, which is nice.

The series was created by Judd Apatow who has become a Hollywood powerhouse as of late. He is responsible for The 40 Year-Old Virgin, Anchorman, Talledega Nights, Knocked-up, and Super-Bad...just to name a few. I personally think that Freaks and Geeks is still the best of all of his work. It has a "real" feel to it and you can put yourself in the shoes of any of the characters.

The idea is basic; a brother and sister try to fit in at their high school. I know......that sounds SO original, but after one episode you'll see that it delivers some of the most entertaining and original TV in a long time. The main cast is great but the supporting cast is also well stocked with names like Joe Flaherty and Ben Foster. Back to the Future fans will be happy to see Coach Fredricks who is well played by Tom Wilson (Biff in BTTF).

The complete series is available on DVD and it contains 2 episodes that were never seen in the original run. This is a show that I go back to time and time again and I have never had anything but a positive reaction when I recommend it to someone. This is true must see TV.
Posted by Chuck Power at 11:07 AM