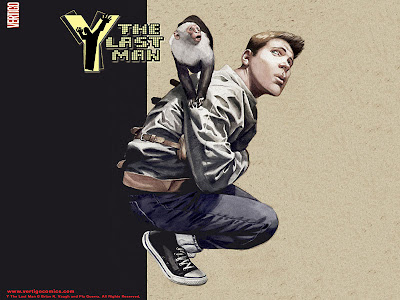 In honor of its appearance on the most recent episode of Lost, I am finally posting about Y the Last Man. I'm not sure why I haven't posted about it yet because it is simply awesome.

I don't like to ruin things for people so I'll try not to drop any spoilers in my quick review. The story revolves around Yorick Brown who finds himself to be the last man on earth after a strange "plague" has wiped out anything with a Y chromosome. Yorick and his pet monkey Ampersand (who has also mysteriously survived despite also being a male) embark on a quest to find his girlfriend who is half a world away. When all the men suddenly die, society is plunged into chaos and the world becomes a very dangerous place for the last man. As the women begin to rebuild we see that things will never be the same. While most women try to return things to some kind of normalcy, others begin to unite and become militant, forming groups like the Daughters of the Amazon who try to take over by force. Yorick finds himself teamed up with Agent 355 who is a member of some secret government agency. She becomes his bodyguard and helps him navigate this strange new world. In their travels they also attempt to uncover the cause of the mysterious "plague" and try to determine if there is hope for the survival of the human race.

Y the Last Man is written by Brian K. Vaughan who is also a writer for Lost. He handles the material in a very serious way while still adding large doses of humor and action. The original series was released in 60 single comics but can now be found in 10 collected versions released by DC/Vertigo. I was really happily surprised when I started reading this story. It is hard to put down once you start.

LOST fans, here is a pic of the issue that Hurley had on the plane. He was reading the Spanish version of issue #15. I will have to go back and see if there is any specific connection to that issue and last week's Lost episode (316). 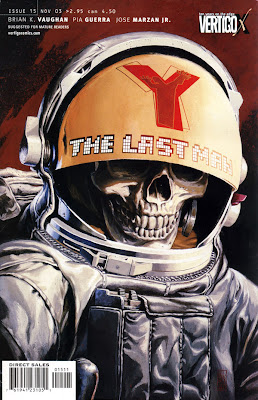