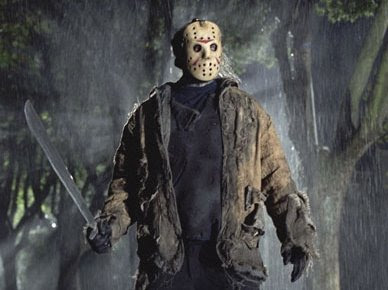 Tomorrow is Friday the 13th. That really doesn't mean a whole lot to me except for the fact that it is also the title of what is, in my opinion, the best horror movie franchise ever. This Friday is special because we will be getting another installment of the Jason Voorhees saga. The new release will be movie #12. Suck on that Freddy.

Friday the 13th has had some low points (I'm talking to you "A New Beginning" and "The New Blood"), but overall I have been very entertained by this collection of films. Jason is an absolute bad-ass killing machine. He doesn't try to mess with your mind, he tries to separate it from the rest of your body. This guy is pissed off and nothing can stop him. Not the endless waves of new camp counselors at Camp Crystal Lake, drowning, being shot, being burned, a harpoon to the eye, going to hell, being ejected into space, not even corny Freddy Kreuger. Get the idea? This dude is durable.

Don't get me wrong, there are plenty of great horror movies out there. The Evil Dead series and Texas Chainsaw Massacre movies are just a couple of the standouts, but for me Jason is King. I have very high hopes for the new film which is titled simply "Friday the 13th". The people who made the Texas Chainsaw remake are involved and that was a really great new look at the original story. I don't think that this new film is a remake and I'm hoping that they have a few new twists to throw in to the usual Jason blood fest at good old Camp Crystal Lake. "Jason X" and "Freddy vs. Jason" were both pretty cool so I'm hoping that the bar has been raised and they keep these high standards for the new one.

Let me know if you think I'm crazy. Would Michael Myers kick Jason's ass? Do we need a Jason vs. Chucky showdown? Should Pumpkinhead have had more sequels? If Norman Bates and the Leprechaun joined forces could they take down all the Gremlins and the Ghoulies? Ok, maybe that last one is a bit far fetched. 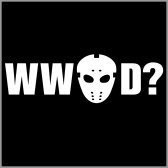