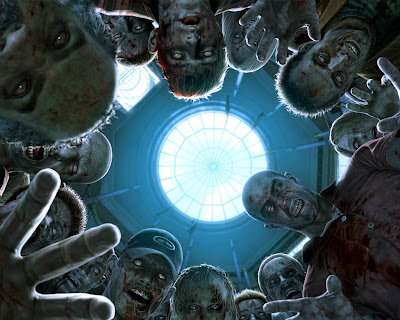 Zombies are having a big month in video games. Two really good games came out recently for Xbox 360. One of them is devoted to battling zombies while the other has a cool unlockable zombie mode.

Left 4 Dead is is a zombie killing spree. It's made by Valve, the same guys who brought us Half-Life, Counter Strike, and Portal. You are part of a team of four survivors of a zombie infection outbreak. You can play with friends or with other strangers online but you MUST work together. If you try to run off on your own, you will not last long playing this game. When I first heard that you would have to use teamwork I was a little bummed because I generally hate everyone, but I was pleasantly surprised to find that the game was set up in a way that makes it very easy to work as a team. Plus, if someone really pisses you off, you can smash him in the face with a molotov cocktail and unload a few shotgun shells into his burning corpse as the zombies feast on his guts........or you could vote him out of the group, but honestly, what sounds more satisfying? All of the enemy spawns and item locations are random so you have a different experience every time you play. There are four different "movies" that you can play. Each movie is broken up into five parts and culminates in a rescue scene in which you and the other survivors must fight off waves of zombies as you wait for your rescue vehicle. I have played through each of the scenarios a few times and have not gotten bored yet so the replay value is pretty high. It's the most fun when you have all friends in your party, but playing with strangers has been much better than I originally expected.

The other zombie attack is actually embedded in one of the best games of the season. Call of Duty: World at War, is the follow-up to the mega hit Call of Duty 4 ; Modern Warfare. I was one of the people who said "Why are they going back to WWII again? Uggg. This is going to stink. Nothing will ever be as good a CoD4. What a bunch of jerks." Then I played the game for five minutes. It is just as good CoD4 and there are enough changes to make it feel like a whole new experience rather than just some new maps. Worst new feature: tanks. Best new feature: instead of helicopter support, you get to call out the hounds. This game is great even without zombies, but it has zombies too! Upon finishing the solo campaign you are treated to a video introducing you to the Nazi Zombies. This new mode puts you in a building that you must defend from approaching waves of zombies. Of course, the zombies always win, but it's cool to see how long your futile efforts can prolong your life. This can be played alone but is much more fun when you get some friends to help you. The zombie mode is not a reason to buy the game, but it is a great bonus on a game that is already really cool.

Left 4 dead is pretty awesome but waiting on people to press start when you're in a full party in the lobby kind of sucks.

Problem solved.
Start a friends only lobby and then change it to public. Now other people will have to wait while you don't push start.